At the Service for Mankind

The author of this short biography is Alfred Kleinschwärzer. Born in Rosenheim in 1960, grown up in a social hotspot, he created and achieved a lot in his life. In 1978 he left the business school and in 1979 he went to the Federal Border Guard in Coburg. Already in 1977 he started with the martial art Kun-Tai-Ko and kickboxing. Later he added Ju-Jutsu, Kenpo and various other styles. In 1992 he trained as a diplomatic security service and was responsible for the security of German embassies in Ireland, China, Turkey and Prague. In 2004 he worked for the United Nations and in 2009 for the European Union Monitoring Mission in Georgen as Security Liaison Officer. In between, he worked as a repatriate of delinquent foreigners to their home countries. He mainly flew the routes Vietnam, Tunisia, Algeria, Morocco, Turkey and Thailand.

He was deployed in the Federal Police at various borders to Switzerland, France and the Czech Republic and on the same assignment at Munich and Stuttgart airports. In 2008 he became a police trainer at the headquarters of the Federal Police Headquarters in Munich with responsibility for 11 police inspections. He is a qualified shooting trainer, anti-amok trainer, trainer for intercultural competence and much more.

In 2011 he was promoted to the higher police service. In the same year he finished his competition career as European Champion in kickboxing, forms and self-defence. From 1983 until 2011 he won numerous Championships and titles, such as German, European- and World-Champion and five times in a row the World Martial Arts Games. He is the founder of the World Martial Arts Games Committee, the National Martial Arts Committee Germany, the Kuntaiko International Association of Budo, the BfSD-Group, the VOSS-Society and the club and style Seiwakan.

As expert in all security related matters, he is one of the most experienced and demanded police defensive tactics instructors in the world. As student of famous Krav Maga Chief Instructor Amnon Maor from Israel, he just passed his instructors degree in 2019. Now in the age of 60, he desided to begin to share his life with the World, by becoming an Author and writer. Enjoy this brief and first time ever published short biography from Alfred (Freddy) Kleinschwärzer, a leading expert for martial arts, safety and security.

Go to  the Shop

The author of this illustrated book 100 Quotations & Wisdoms was born on 23.03.1960 in Rosenheim. He grew up in a violent part of his City and therefore his youth was marked with lots violence. At the age of 13 he started with Judo, followed by Karate and then Taekwon-Do.

At the age of 17 he got to know the style of Kun-Tai-Ko in a City close to his. Since then he has been devoted to martial arts in all its diversity. His grandmasters were the legendary Lucien V. Ott, a former French foreign legionnaire and passed away in 1990, the former UDT Officer (Universal Demolition Team - later renamed US-Navy Seals), Grandmaster Neal J. Hummerstone from the USA, took over his further training.

Through both top grandmasters, tactical training was also added by them. It was very helpful for him as he joined later the Federal Border Guards in 1979. As the Chief Instructor of the Police Defensive Tactics with the RHQ of the Federal Police, Kleinschwärzer was responsible for the training of law enforcement training, shooting, sports, arrest and restraint training as well as law and order lessons and training to the Federal Police Officers. In addition to his work as a Instructor, he was also serving abroad as diplomatic security police officer for various Embassy's such as in Ireland, China, Turkey and the Czech Republic.

Further tasks were his missions in Kosovo for the United Nations and the European Union with a post-war project (EUMM) in Georgia. His activities also included deportations to Vietnam, Thailand, Tunisia, Algeria, and Turkey. Always striving to connect people and to bring them together in cultural, sporting and social ways, Kleinschwärzer founded various organizations that pursued this goal. Thus he founded the KIAB (Kun-Tai-Ko International Association of Budo), the NMAC-Germany (National Martial Arts Committee), the WMAGC (World Martial Arts Games Committee), the BfSD-Group (Bundesfachverband für Sicherheit & Selbstverteidigung in Deutschland) and last but not least the VOSS-Society e.V.

The VOSS-Society e.V. takes care of old people socially by financially supporting food tables. For a monthly small flat fee, VOSS members receive unlimited free seminars in return.Follow the life of Alfred Kleinschwärzer in the form of pictures and at the same time receive a collection of wisdom, quotations and budo wisdom. He invites you to see his thrilling and interesting World of duty, passion of martial arts and experience of life.

Go to the Shop 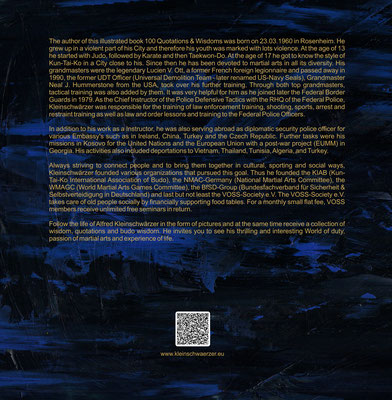 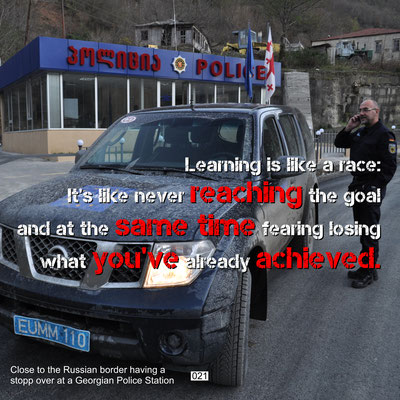